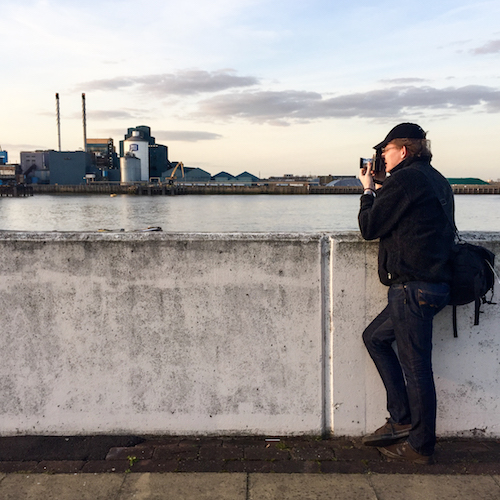 Quiet, calm and painterly. These are three words that evoke the sense of Chris E. King’s imagery, which photography writer Miranda Gavin describes in her foreword to the photographer’s inaugural book No Opportunity for Regret (by Dark Spring Press, 2018) as being, “at the confluence of documentary landscape and travel photography.”

King’s journey started in the early 1970s using a 110 Agfamatic camera. Over the years, his ongoing dedication to image-making has transformed a childhood hobby into a long-term practice. Today, it’s rare to see the photographer without a Leica in tow, framing the world with recognizable perspective using clean horizontals and verticals with a formalist approach to composition.

Upon joining a London-based photography collective in 2010, King expanded his personal practice from taking pictures to printing and exhibiting, opening private worlds to the public domain. The resulting short-run limited-edition C-type prints are presented large in scale with crisp black frames placed immediately alongside image edges. This leads to the viewer’s experience being akin to looking through a window into a parallel reality. While each scene is immersed in a world touched by humankind, individuals are rarely presented.

King’s work has been shown at galleries and art fairs in London, New York, Arkansas, Mexico City, Vancouver and beyond. In 2016, he was awarded the Best Photograph at the National Open Art Competition in London, England. This was followed in early 2018 by the solo exhibition No Opportunity for Regret at the Curious Duke Gallery in London. This presentation was featured in FAD magazine’s ‘Top 7 art exhibitions to see this week in London’, as well as in Interior Design’s print magazine. In December 2018, a solo show of the same name was presented at the Ivy Brown Gallery in Manhattan, New York City which also officially launched King’s book publication in the USA.

King lives in Lewes, England, with his American fiancée Susan, and continues to pursue new and ongoing bodies of work alike.

Art is Your Life. Make it Your Living. Susan Mumford, Chris King (2015)

2012-Ongoing: Director and Producer of weekly image for Be Smart About Art’s Sunday reading blog.